When we think about nutrition, we may not necessarily consider how our present health may have been impacted by our health as young as when we were infants.

During infancy, nutrition is especially important, as it is a period that can be linked with health during later stages of life. Studies have shown that early feeding practices can play a significant role in preventing diseases and promoting health.¹ 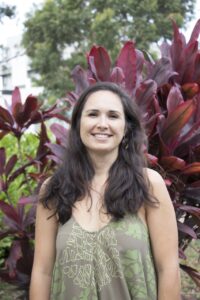 Marie Kainoa Fialkowski Revilla, an associate professor in the Department of Human Nutrition, Food, and Animal Sciences at the University of Hawai‘i at Mānoa, spoke about the importance of good nutrition during infancy.

“The likelihood for being overweight, when (babies are) older, can be influenced by, their diet during infancy. … There’s just lots of evidence that suggests that, through healthy complementary feeding, having a diverse diet, it’s going to improve their health outcomes, reduce their likelihood for chronic disease,” she said.

The World Health Organization (WHO) defines complementary foods as the solid foods that guardians introduce when infants reach a stage in which breast milk or formula can no longer provide them with all the nutrients they need. They are complementary because they are solid foods that guardians introduce along with breast milk or formula.²

As the foods that infants are eating to help them grow into healthy children, there are four important considerations that the WHO suggests guardians take into account when selecting and preparing complementary foods for their infants.

“We should … think about the best diet, the best foods. We want to be setting them up for success,” Dr. Fialkowski Revilla said.

The first consideration the WHO notes is timing – when to introduce complementary foods to infants. Typically, babies are ready for complementary foods when they are around 6 months old. Timing is important as it can impact the infant’s likelihood of becoming overweight or obese at later stages in life, as well as their growth and development. ²

The second is ensuring that the foods are providing adequate nutrition, energy, protein, and micronutrients.² Fialkowski Revilla said it’s important that complementary foods are high in iron and zinc, as breastmilk and formula do not provide enough at the 6-month stage.

“With complementary foods, you really want to focus on the vegetables – poi, starchy roots,” she said.

The third consideration is ensuring that the foods are safe – stored and preparedhygienically.²

The final consideration is ensuring infants are being fed enough and in the right frequency for their needs and age. The WHO recommends starting off with mashed foods or semi-solid when babies are between 6-8 months old, and that guardians feed babies from two to three times a day, increasing to feeding them three to four times a day when they are around 9 months old. By the time infants are around 1 year old, the WHO recommends introducing children to the foods the family is eating. ²

On top of the WHO’s considerations, Fialkowski Revilla notes that the diversity of complementary foods is especially important.

Traditional Native Hawaiian foods hold a lot of nutritional benefits for babies, along with having cultural value.

“We have a lot of really great traditional foods here, and we want to make our babies ʻono for those foods,” Fialkowski Revilla said. “Those cultural foods are very meaningful. They carry a lot of value and spiritual benefit, and, with the idea too of the mana and food and things like that, it’s such a shared experience.”

Some examples of traditional Hawaiian complementary foods can include ʻuala (breadfruit), poi, mashed kukui nuts, sauces made with opihi, ʻaʻama (crab), and vegetables and herbs.³

“Our traditional foods, like when we think about lūʻau – the green leaves – I mean, that is packed (with) so many nutrients. It’s so good – vitamins, the fiber – and it just tastes ʻono,” she said.

In one of her studies, Fialkowski Revilla found that poi was an especially popular first food among moms. Poi is a good example of a complementary food because it’s versatile, its consistency can be modified based on the baby’s development, and it’s nutrient-dense with minerals, vitamins, and fiber, Fialkowski Revilla said. She also noted that some moms mixed poi with breast milk or formula, others with sweet potato or rice cereal.

As important as nutrition is for infants, Fialkowski Revilla noted how nutrition is very much a family effort.

In one of the studies Fialkowski Revilla did, she found that many mothers were seeking feeding advice within their own families – their moms, mothers-in-law, sisters, or aunties.

While it’s important for babies to eat diverse diets, Fialkowski Revilla notes that exploring food doesn’t have to be exclusive to babies.

“You want them to pick up and be exposed to lots of different textures. It’s kind of like they’re playing with their food, they’re exploring with your food, and so why can’t we also explore foods, explore different pairings, or explore different ways to make food? Just don’t be afraid. Sometimes it’ll come out great, and sometimes it may not come out that great, but it’s OK, right? Because we’re having fun with her food,” she said.

“So, our traditional foods – instead of eating (just) poi, add it with some fruit, throw some granola on there. You can kind of modernize some of the foods, too, so that you can incorporate them into your diet in multiple different ways,” she said.

Currently, Fialkowski Revilla is doing a study that tracks through photos that moms upload to a mobile app what babies eat throughout their first year. She hopes her study will provide pertinent data and information that comes from the community and ensures that foods and support programs, health promotion events, and activities are being delivered in an appropriate and acceptable way that addresses the needs of the community.

Marie Kainoa Fialkowski Revilla is an associate professor in the Department of Human Nutrition, Food and Animal Sciences at the University of Hawai‘i at Mānoa’s College of Tropical Agriculture and Human Resources. Her research focuses on nutrition and health in indigenous populations and infant nutrition. Fialkowski Revilla grew up in Waiāhole Valley and graduated from Maryknoll School. She got her undergraduate degree from Dartmouth College and received her master’s degree and PhD from Purdue University.

If you are interested in participating in Fialkowski Revilla’s current study, are 18 years old or older, Native Hawaiian, and an Oʻahu resident, you can contact 808-375-3785 for more information or email whrc@ucera.org.