Now more than ever, plant-based eating seems to be growing in popularity. 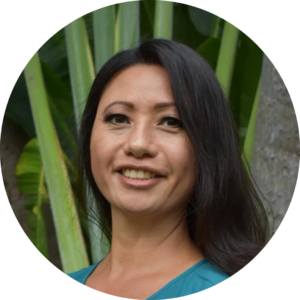 More and more people are Googling “plant-based” and the topics related to it. In 2020, plant-based food sales increased by 27%, and more than half of all U.S. households had purchased plant-based foods at some point.¹

The traditional Native Hawaiian diet was largely plant-based. Dr. Kekuni Blaisdell found that the diet consisted of around 78% carbohydrates, 12% protein, and 10% fat, with poi, ʻuala,ʻulu, green leafy vegetables, and seaweed making up most of the carbohydrates.²

“For Hawaiians, and I guess for a lot of local cultures in general, they think that eating meat was part of the culture. Some people think pork laulau and kalua pig was part of it, and it wasn’t. It was a plant-based culture,” said registered dietitian and certified diabetes educator Dr. Jodi Leslie Matuso.

Matsuo, who was also a graduate of the Native Hawaiian Health Scholarship Program, talked about eating plant-based and how it is beneficial for both personal health and the health of the environment.

“You don’t have to be vegan to be plant-based. You can allow for the inclusion of fish and some other foods at least part of the time, as long as the majority of your diet is – I usually tell patients 80% to 85% of your diet is plants – then that other 10% to 15% you can use for special occasions – for birthdays, for when you’re socializing with friends, or at a party, or eating out, then you can allow some flexibility for that,” she said.

Dr. Claire Kuʻuleilani Hughes’s research found that there were also several benefits to the traditional Native Hawaiian plant-based diet. She found that consuming soy products, fiber, fruits, and vegetables daily, along with reducing the consumption of eggs, whole milk, and red and processed meats, was associated with reducing the risk of cancer.²

On top of that, many traditional Native Hawaiian foods were also highly nutritious.

“Taro leaves are really huge. … If we’re talking about Hawaiian diet, seaweed was a big source of a lot of different nutrients. Even in the root vegetables itself, like the sweet potato, and the taro root, and the breadfruit, there were a lot of nutrients in there,” Matsuo said.

“There was a study that was done that compared someone who ate plant-based, veggie meats to people who had eaten regular meat and they actually found that people who had the veggie meats had better health outcomes at the end of the study than the ones who stuck with the chicken and the beef,” she said.

In fact, researchers at Stanford Medicine found that switching out red meat for plant-based meats helped lower some risk factors for cardiovascular disease.⁴

“Eating plant-based … is one of the biggest things that you can do in terms of helping to make an impact on climate change,” Matsuo said. “In terms of, say, animal ethics, a plant-based diet is a way to go. … In terms of climate – being good for the environment, good for the planet – it’s also the way to go. Because it’s low of what you call carbon footprint, that it makes a low environmental impact.”

A carbon footprint is the total greenhouse gases that get emitted as a result of a certain activity.

Farms dedicated to raising livestock account for 1/3 of the world’s total land and more than 2/3 of agricultural land. On top of this, around 40% of crops grown globally are used to feed livestock. Scientists estimate that anywhere from 18% to 51% of global greenhouse gas emissions are caused by the livestock industry. Livestock production is also the leading agricultural cause of water pollution.³The Intergovernmental Panel on Climate Change estimated that a global shift toward eating plant-based could help reduce greenhouse emissions by8 gigatons annually, which is more greenhouse emissions than the U.S. emits annually.⁴

“I think plant-based diet can be considered a type of sustainable eating. There’s a lot less environmental impact on the planet from growing crops, growing vegetables, versus raising livestock for food,” Matsuo said. “Sustainable eating to me, in a nutshell, is eating foods that are good for you and good for the planet. It’s beneficial both ways.”

At the Kukui Lifestyle Medicine clinic, which Matsuo and her husband Dr. Leon Matsuo founded, she runs a nine-week program called the Pono Program, in which she offers cooking demonstrations and health education. Through her classes, Matsuo shows that eating plant-based does not have to be restrictive.

When selecting recipes for the program, there are several factors she takes into consideration.

“It had to be simple, it had to be liked by local people. So it has to suit local people’s tastes, and, of course, it had to be healthy and plant-based. So, with that in mind, I would choose simple recipes,” she said. “Ingredients-wise, because it can be expensive, … it has to be affordable as well.”

Matsuo said she has three tips for those looking to eat plant-based. The first is to think of what people can add to their diet – the ways they can add more fruits and vegetables.

“I think just start by thinking about what foods you can add to your diet. People think that when you hear the word diet, you think of being so limited and taking away from what you normally eat, but maybe looking at it from the opposite way and saying, ‘What can I add to my diet to become more plant-based?'”

Her last tip is to take recipes people already use and substitute the meat with either tofu, beans, or more vegetables.

“You can use the same spices, you can use the same flavorings, but just switch out the meat for tofu, or for beans, or just more vegetables. So, start off with dishes that are easy,” she said. “If there’s familiar dishes, then they’re probably more likely to stick to it,” she said. “I’ll make a veggie luʻau, like how they have chicken luʻau or squid. … For the meat replacement, I’ll use either veggie chicken, or taro, or sweet potato. Sometimes I do like a tofu poke, instead of regular poke.”

Despite getting comments about people never having seen a Hawaiian vegetarian before, she said plant-based eating is part of the Native Hawaiian culture.

Dr. Jodi Leslie Matsuo was born and raised in Kona. She graduated from Konawaena High School and attended the University of Hawaiʻi at Mānoa where she received a master’s and a doctorate in public health. She is a registered dietitian and certified diabetes educator, with training in integrative and functional nutrition, and alumna of the Native Hawaiian Health Scholarship Program. Along with her husband, Dr. Leon Matsuo, she founded and runs the Kukui Lifestyle Medicine clinic in Kailua-Kona. She also writes the Mālama I Kou Kino column for Ka Wai Ola.