When doing a Google Image search for “Hawaiʻi foods,” a multitude of photos of shave ice and SPAM pop up. And for many Hawaiʻi residents, these foods are staples. Although, we may not necessarily think about the history behind these foods and their connection with settler colonialism.

“The reason why these foods kind of rise to the surface as emblematic foods of Hawaiʻi, I think, has everything to do with the way that Hawaiians have been subject to being reduced to just another ethnic category in Hawaiʻi,” said Hiʻilei Julia Kawehipuaakahaopulani Hobart, who was born and raised in Kailua and attended Assets School.

Hobart, who is now an assistant professor of anthropology at the University of Texas at Austin, spoke about how Hawaiʻi’s food scene has been impacted by historical structures of settler colonization.

“We can think about the arrival of the missionaries in the early 19th century and the way that really begins an early influence on ideas that have to do with race, food, and health. Hawaiʻi’s local cuisine, becomes this amalgamation of different food traditions that are brought in by immigrant communities to Hawaiʻi, particularly through the plantation complex, become a really key identifying marker for people who understand themselves to have kind of a pilina relationship to Hawaiʻi.”

With the colonization of Hawaiʻi came the spread of disease, the loss of land that Hawaiians used to grow traditional foods like kalo, and a breakdown of agricultural systems in favor of monocultures.¹ Hawaiʻi’s food scene drastically changed after colonization as land previously devoted to growing food intended for local use was converted to land used to grow food like rice, sugar, and pineapple for exportation.² Innovations in transportation and shipping companies like Matson, which was introduced in Hawaiʻi in 1882, also made it easier to import foods from the Pacific Coast to Hawaiʻi.³ Today, Hawaiʻi imports around 85-90% of its food.⁴ 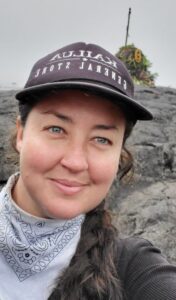 Hobart also discussed the development of what is termed the “cold chain” – a refrigerated food chain that facilitates the globalization of the food system. For example, a Hawaiʻi resident could purchase a banana grown in South America, shipped to California, and then shipped to Hawaiʻi, despite Hawaiʻi being capable of growing its own bananas.

“It diverts food gathering practices away from ʻāina and water-based practice from farming and fishing – getting your food fresh. But also, it requires people to be completely reliant on energy infrastructures that have an exploitative relationship with people in Hawaiʻi,” Hobart said. “When we think about the cold chain, and Hawaiʻi’s reliance on imported foods, it’s not just about the reliance on the imported fruits themselves. But it’s also the way that that system requires people to be invested in an exploitative relationship with energy companies.”

One of the foods through which we can understand the idea of the cold chain is shave ice.

“One of the things that really strikes me … is that there’s nothing there’s nothing Hawaiian about Hawaiian shave ice,” Hobart said. “We do have snow and ice formations at the summit of Mauna Kea and occasionally Haleakalā. But traditionally, Native Hawaiians weren’t consuming ice.  Those are kapu spaces, those are sacred spaces. We’re not going up there and getting frozen water to consume.”

Shave ice was introduced in Hawaiʻi around the mid-1800s by Japanese immigrants who were working on pineapple and sugar cane plantations. Workers would shave blocks of ice and cover the shavings with sugar or fruit juice – hence the name shave ice. It was a food that helped those who were working in the sun all day cool off. Some workers even opened shops and sold shave ice after work.⁵

“One of the reasons why I think shave ice becomes what it is … is because it’s one of the only foods that makes a rainbow. And that rainbow, in the post statehood era becomes a really potent symbol of Hawaiian state multiculturalism or Hawaiʻi state multiculturalism, and that melting pot that becomes really celebrated,” Hobart said. “In that sense, it marks the colonization of Hawaiʻi in a lot of really particular ways. It not only kind of fits into this cold chain, and this over reliance on these energy infrastructures, and indigenizes it in a particular kind of way, but it also kind of aesthetically works to resolve the ethnic tensions that the U.S. was feeling, or the racial anxieties that the U.S. was feeling about Hawaiʻi’s inclusion in the United States as a state. … In the post-statehood era, the multiethnic melting pot becomes the thing that makes Hawaiʻi particularly celebrated and attractive in the U.S. nation state. And shave ice kind of fits right into that narrative.”

Aside from shave ice, SPAM is another food that many people strongly associate with Hawaiʻi.

SPAM was introduced in Hawaiʻi during World War II, providing a non-perishable food for soldiers. Many credit Barbara Funamura, a Japanese American woman, with creating the first SPAM musubi. Even after WWII, many people continued eating SPAM as it was cheap and people could prepare it in a variety of ways.⁶ SPAM has even found its way into Hawaiʻi fast food with chains like McDonalds serving a SPAM rice and egg platter. The “What is SPAM Brand” page on the SPAM website even has a note saying that the state of Hawaiʻi collectively consumes 7 million cans of SPAM each year. And the prominence of SPAM in Hawaiʻi doesn’t stop there. Articles associating SPAM with Hawaiʻi tout it as a “comfort food” that has “helped shape Hawaiʻi.”

“People … love spam and eat spam, and I love spam, and I eat spam. … It’s one of the things that reminds me of home. But it also reminds me that our relationships to home or relationships to Hawaiʻi are really complicated. And they’re shaped by colonialism in ways that are very difficult to extract ourselves from,” Hobart said. “One of the reasons why it’s so complicated for me is because people have deep emotional investments in these foods. And those emotional investments don’t just have to do with identity politics or colonialism, but it has to do also with like, what your grandmother used to cook for you, how your family expresses love, how your family expresses care for one another.”

Although it can be difficult to reconcile history with our personal attachments to these foods, Hobart said something we can do is educate ourselves.

“I think the more that we kind of lean into that political consciousness and the more that we can kind of think about and really understand in a deep way the history of colonialism in Hawaiʻi, the better equipped we will be to think about these very real and everyday challenges that people have in regard to food access, healthy eating, and sustainability.”

Hi’ilei is shown here in blue hat participating in a panel on food systems in the hale halawai on Kaho’olawe with a group of physicians, farmers and foodies focused on ‘Ai Pono, Ola Pono in 2012.  L-R:  Dr. Emmett Aluli, Hi’ilei Hobart, Elise Dela-Cruz-Talbert, Robina Campaniano and Sandra McGuinness.  Photo above is at Pu’u Huluhulu in July 2019 where Hi’ilei volunteered in the kitchen.

Hiʻilei Julia Kawehipuaakahaopulani Hobart is an assistant professor of anthropology at the University of Texas at Austin with a food studies PhD from NYU. Her research focuses on Indigenous foodways, Pacific Island studies, and settler colonialism. You can read more about her work and studies at her website www.hiokinai.com/.